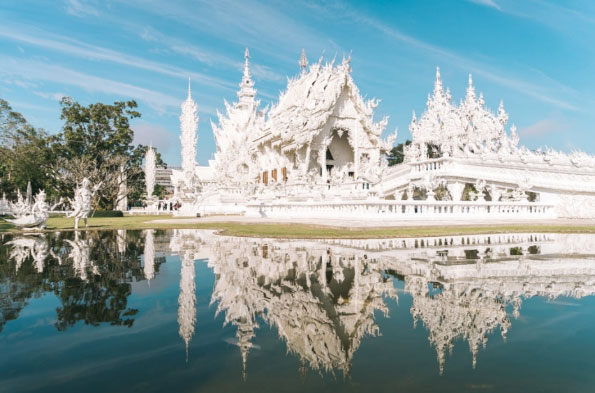 Wat Rong Khun (The White Temple)  If there is any antidote in Thailand for visitors who are “all templed out,” then it is here, a few kilometers south of Chiang Rai city, just off highway No 1. Nothing compares with the first breathtaking view of this structure, the creator of which, famous artist Chalermchai Kositpipat, says will never be finished during his lifetime. It is as if a sculptor crafted this intricate work from one enormous block of ice, yet it sits there sparkling in the sunshine, and grows rather than shrinks. Wat Rong Khun, to give it its full title, has the uncanny quality of appearing to be bigger and more important the longer one spends here. Bigger because everywhere you turn there are new features to see, from the shoals of white and silver carp under the fountains to the incredibly lifelike statue of the much revered local monk, the late Prakoo Sawai, facing every visitor.

Wat Rong Khun, perhaps better known to foreigners as the White Temple, is a privately owned art exhibit in the style of a Buddhist temple in Chiang Rai Province, Thailand. It is owned by Chalermchai Kositpipat, who designed, constructed, and opened it to visitors in 1997. Every detail of the temple and structures as the bridge of “the cycle of rebirth” and the “Gate of Heaven” carries meaning and encourages the visitor to reflect on the Buddhist teachings that show the way to escape from the worldly temptations, desires and greed and focus on the mind instead.

The White Temple encourages us to think as well as gaze. You approach the entrance past a sea of 500 hands clawing at the air, punctuated by the occasional face in torment— “The Beauty of Anguish.” Does this portray sinners craving redemption? Chalermchai, in his wisdom, leaves us to guess. Nowhere is this more apparent than in the central hall with its unique, potentially shocking, murals. A skull is in place over the entrance where you might expect a serene Buddha. New York’s Twin Towers are depicted—one on fire, one with an airliner fast approaching. Spiderman and an easily-recognizable George W. Bush are seen amid images of warfare. Local schoolchildren, some with remarkably good English, act as unofficial guides here…an example of the great good the White Temple has created for the community. There is no admission fee for the thousands of visitors who flock here daily; local traders sell souvenirs, coffee and snacks; and land values have risen all around. A contrasting golden building nearby is the “Hall of Masterwork,” where more of Chalermchai’s vivid imagination can be admired, also free of charge. Distance from the Legend Chiang Rai 14.6 KM. 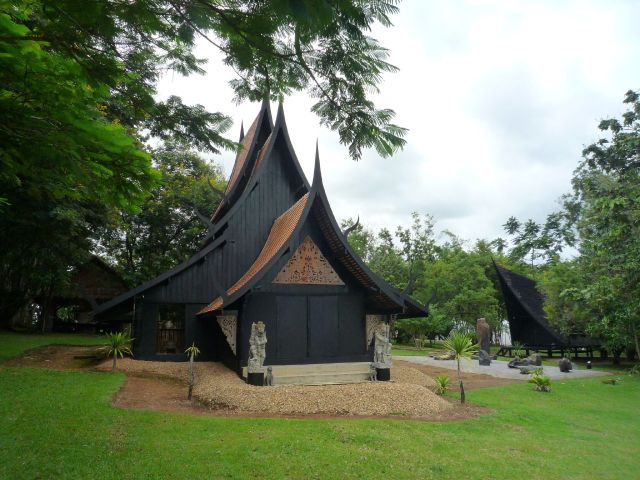 The Black House is a complex of 40 buildings, most made of dark teak wood, set in large, beautiful gardens. In Thai known as Baan Dam, meaning Black House, the buildings house a collection of paintings, sculptures, silver and gold items, animal bones and skins. Baan Dam is the work of Thai artist Thawan Duchanee, who started the project in 1975 and lived in several of the houses.  On the grounds are about 40 houses in various shapes and sizes built from wood, concrete, brick, glass and terracotta; most of them are in black. The Black House is set in large grounds with trees, rock gardens and sculptures. The architecture of the Black House is a mix of Lanna, Laotian and South East Asian styles, both traditional and modern. Distance from the Legend Chiang Rai 12 KM. 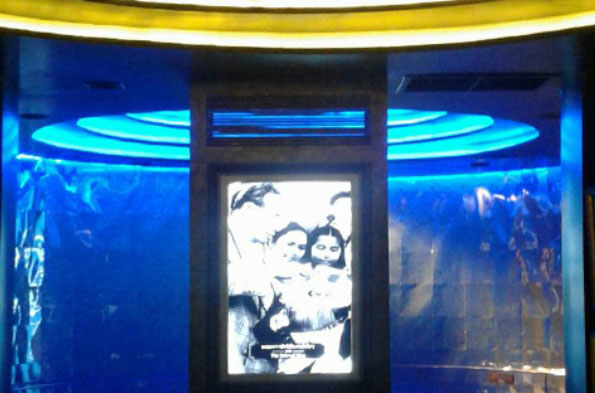 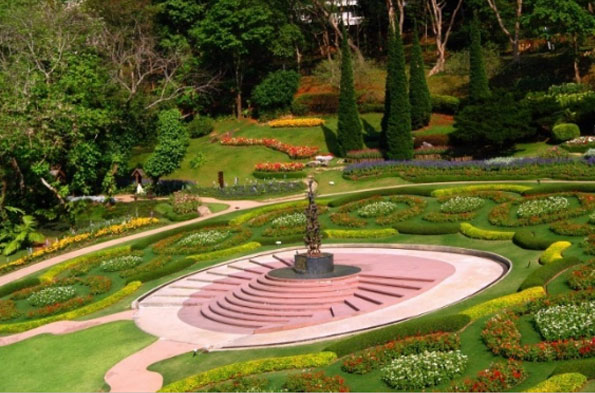 The Mae Fah Luang Garden is a beautifully landscaped garden and tourist attract which is part of the Doi Tung Development Project. It is located on 10 acres of land that was originally the Akha village of Pa Kluay, part of an important route for opium caravans and those involved in heroin-related trafficking and weapons in the past.  With the villagers resettled, a garden of temperate flowers was created in accordance with the Princess Mother’s wish to give Thai people who have never travelled overseas an opportunity to enjoy a temperate flower garden.  The decorative flowers in Mae Fah Luang Garden are grown and nurtured by local villagers, hundreds of whom have been trained and work there, earning a sustainable livelihood. Situated on the peak of Nang Non Range, the Chang Moob area is 1,500 meters above sea level. It has a cool climate year-round, and was once the largest opium growing area and a major drug trafficking route in the region. Because of this, forest land was completely destroyed. Today, the area has been transformed into an arboretum where native flora and rare species are grown alongside rhododendrons from different countries. Sorrel Himalayan Cherry and such native orchids as lady’s slipper are grown in the natural environment amidst a forest of pine trees. 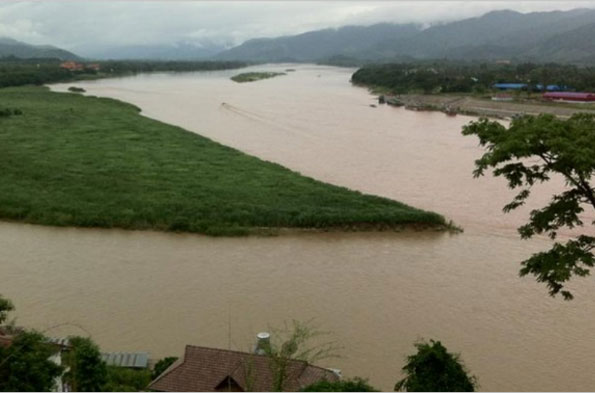 Historically the Golden Triangle has been an area well-known for the growing of opium, and the name comes from a US State Department memo on the practice. These days, though, the place lives on the cultivation of tourists, and this is undoubtedly the largest tourist trap in northern Thailand. Distance from the Legend Chiang Rai 70 KM. 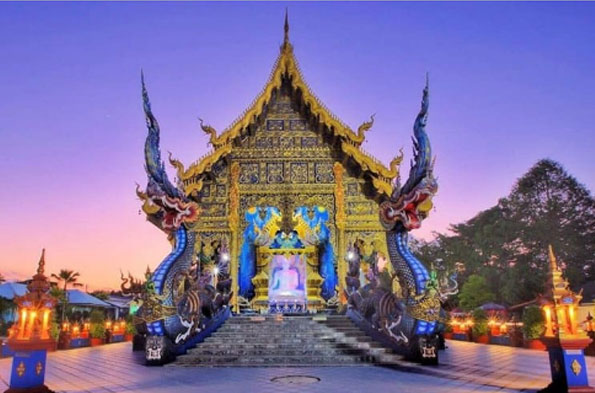 Wat Rong Suea Ten, better known as the Blue Temple, is a Buddhist temple that stands out from the others because of its sapphire blue colour. It is not an active temple, no monks live here.  Wat Rong Suea Ten translates to “House of the dancing tiger”. The temple was named after the tigers that once roamed the area.  At the start of the 21st century Wat Rong Suea Ten had fallen into a very bad state of repair. It was decided to completely rebuild the temple. The works were completed in 2016.  The Blue Temple was designed by Putha Kabkaew, a student of Chalermchai Kositpipat, who created the famous White Temple. Distance from the Legend Chiang Rai 3 KM. 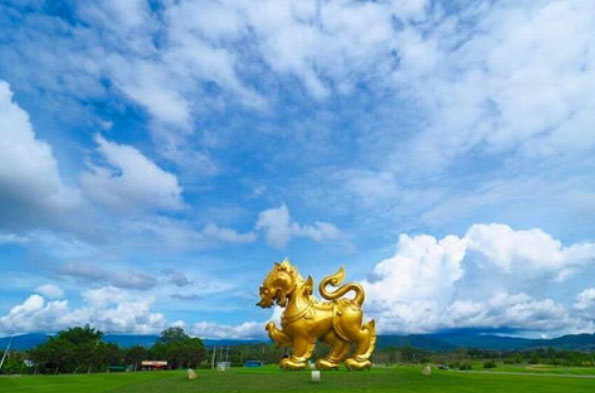 Previously known as Boon Rawd Farm, the fertile soil here was used to grow barley for beer production and the farm was off-limits to the general public. That all changed when Boon Rawd decided to transform the area into a sustainable tourism project with Singha Park opening its gates to visitors in December 2012. Large areas of the park are still a working farm with fruit orchards and tea plantations as well as some of the original barley fields. These days though, the barley is mainly used for malted drinks and health foods. Distance from the Legend Chiang Rai 14 KM.

Visit and appreciate the beautiful architecture of Doi Tung Royal Villa or The Princess Mother’s Royal Villa that blends the Lanna style with modesty, surrounded by flowers and plants. This place was built in 1989 by Princess Mother’s intention to stay and work from here. The villa is built on the hill with wide landscape view, adopting Lanna architecture style mixed with Swiss Chalet style. The wall with the stars that aligned like Princess’s Mother birthday is one of the interesting attractions here...Distance from the Legend Chiang Rai 58 KM. 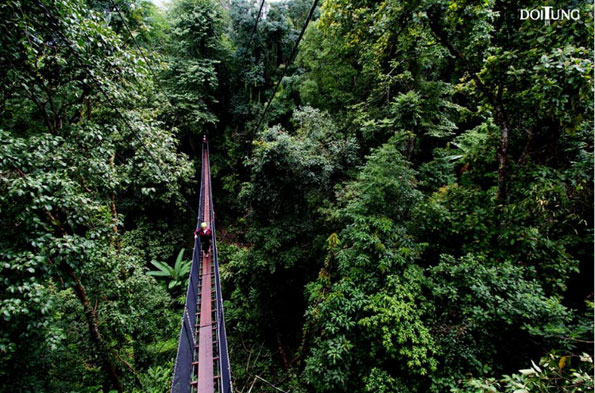 Not far inside the Mae Fah Luang Garden was a sign for a Tree Top Walk. The Doi Tung Tree Top Walk is the latest activity to match the modern-day trendy and wandering lifestyle. Explorers can experience a 295-meter long walkway among the trees of the Mae Fah Luang Garden at 30 meters above the ground.  It’s a fun activity that allows visitors to see the jungle from a bird’s-eye view. Rope bridges take you above areas of the forest where you can overlook coffee trees, seasonal trees, the dam and distant mountains. 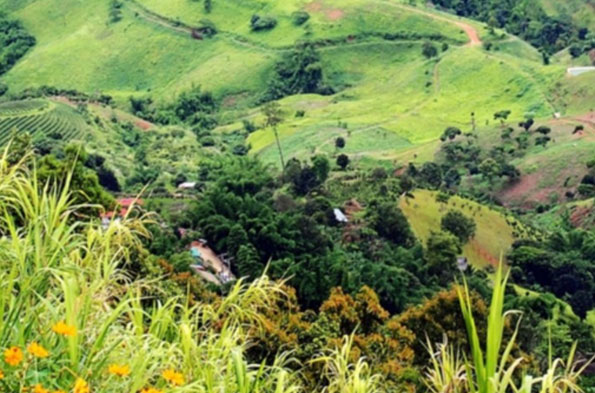 Doi Mae Salong is the site of Santi Khiri Village, a community settled by the former Chinese 93rd Division who moved from Myanmar to reside on Thai territory in 1961. The village became well known for its enchanting scenery and tranquil atmosphere. Today it is a major tourist attraction with its small-town ambience, delicious native Chinese dishes (Yunnan), small hotels and guesthouses catering to visitors and tea, coffee and fruit tree plantations. The scenery is especially picturesque in December and January when sakuras are in full bloom. Scattered with many hill tribe villages, Doi Mae Salong is ideal for Trekking. Other activities available here include a visit to tea houses, tea plantations, tasting stewed pork leg with hot steamed buns and Yunnan food. 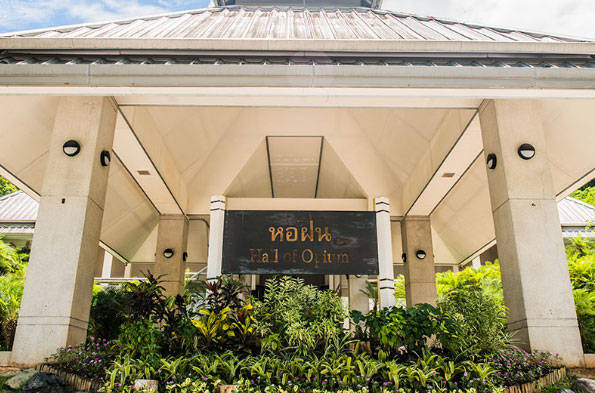 The Hall of Opium Museum is a combination of multimedia and exhibition to make learning more fun. Aiming to educate people about opium, this exhibition portrays every angle of the story, starting from the history of the Golden Triangle, the origin of opium, the opium war, opium warlords, drug smugglers, opium effects, the battle against opium and poppy growing, to rehabilitation of living conditions of the people who live in the central of the Golden Triangle, the former worldwide infamous drug trading zone.